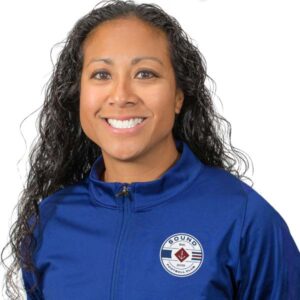 Chalise Baysa has an impressive coaching and playing resume, previously an Assistant Girls Director of Coaching at FC Alliance and Greater Seattle Surf.  Developing a passion for the game at the age of 4, while her parents were stationed in Atsugi, Japan, Chalise has continued to expand her playing experience from youth soccer to playing for the Philippine National Team. In 2021, Chalise was promoted to Assistant Director of Coaching for Sound FC.

Home grown in the Pacific Northwest, Chalise played top-level club soccer at FC Royals, and was a 4-time All-Wesco selection at Oak Harbor High School.  Chalise continued her soccer career playing for the University of Oregon, where she was a 3-year Co-Captain, 4-time All Pac10 team selection, 4-time Offensive MVP, a Jackson Award Winner, and the All-time leading scorer and points leader for the Ducks.  After college, she played in the W-League with the Kansas City Mystics and Seattle Sounders Women.

In September of 2013, the Philippine Women’s National Team invited Chalise to play in the 2013 AFF Women’s Championship, where she earned 3 International Caps, and 1 goal. On the coaching side, Chalise was an Assistant Coach at Seattle Pacific University (SPU).  During her time there, SPU had become one of the nation’s elite women’s programs, winning the 2008 NCAA Division II National Championship and making multiple NCAA Tournament appearances.

Chalise also has extensive coaching experience and demonstrated success at the youth and ODP levels in Hawaii and Washington. She holds her USSF National “A” License.