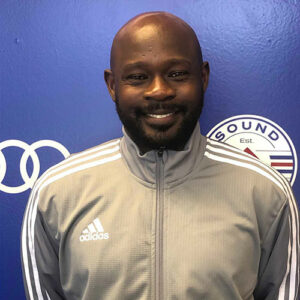 David has had experience coaching at a college level. He was an assistant coach at Trinity Lutheran College (NAIA) and at Adams State University (NCAA DII). He holds USSF “B” and United Soccer Coaches National Advanced Diploma licenses.

David grew up in Uganda where he played high school soccer. Upon arriving in the U.S, David played college soccer at the University of Northwestern St. Paul MN for four years where he was all-first team conference and captain for two years. He graduated with a B.S in Youth and Family Studies.

David’s Coaching Philosophy: “Soccer is a players’ game. As a coach, I strive to share my passion for the game with players and empower them to make good decisions for themselves both on the field and in their daily lives.”

David works with field players on technique, tactical improvement, and fine-tuning. He brings an energy and excitement for the game and uses his experiences to train youth and college players in preparation for the playing level they aspire to. He also enjoys spending time with his family and friends and traveling.