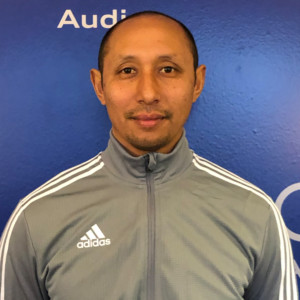 Eugene’s teams have won Nomads, the Orange Classic, been semi-finalists in the prestigious Surf Cup Super Group, participated in the WAG’s Showcase, the Texas Shootout Showcase, and the Pleasanton Rage Showcase. Dozens of Eugene’s players have gone on to compete at various levels nationally, professionally, regionally and collegiately over the years.

Eugene began coaching in WA in 1998, and since then his teams have been in 13 state finals, won 7 state titles, won 3 Far West Regional  Championships, and has been in the top 2 of the US Youth Soccer National League

Coaching Philosophy: “I want to teach players a good brand of soccer. Where the ball is mainly on the ground and players are having to solve problems all over the field rather then aimlessly kicking it up the field. I encourage and teach players to be skillful and creative, with good off the ball movement to create moments for themselves or others. Good positional play to open up the game creating time and space for themselves and for their team mates.”

Eugene enjoys spending quality time with his wife Tonya and their 2 children Maddox and Tia.