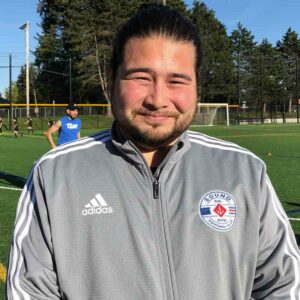 Evan Spong grew up in Woodinville, playing for local clubs Spectre, FC Alliance, and Crossfire Premier until U17.  At age 17, he stepped away from soccer for three years, moving to Park City, Utah to finish High School, pursue competitive free-skiing, and to help his younger with his career as a professional skier.

After skiing, Evan moved to Bellingham, WA to begin college classes at Whatcom Community College.  While at Whatcom, he found his passion for soccer again, where he joined the team as a walk-on, became team captain, and earned a full- scholarship.  While at Whatcom, Evan was an assistant coach at Rangers FC before moving to FC Alliance in 2010. He holds a USSF National “D” License.

In his spare time, Evan enjoy skiing in the winter and ardently follows Real Madrid.  He also works at the Clearwater School in Bothell.