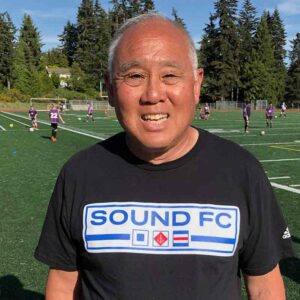 Jon “Mats” Matsushita has worked with Washington’s elite for more than twenty five years, including Washington, and Region IV Olympic Development Program staffs, working as head coach of various state teams on the boys and girls side of the program.  He has had the privilege of coaching two Gatorade Players of the Year award winners.

Jon worked with various Seattle-area high schools, such as, Juanita High School, Lake Washington High School and Eastlake High, where he guided the girls a state championship in 2002 as well as the boys in 1998 and 1999.  NSCAA ranked that team second in the nation for large high schools and awarded him the Coach of the Year in 1998. Jon holds a USSF National “A” License and Youth License.

A Seattle native, Jon grew up in Bellevue and played soccer for the Lake Hills Soccer Club and the University of Washington where he played in central midfield as a six.

Jon taught in the Lake Washington School District at the Junior High and High school levels, mathematics, history and computer education and coach of various sports including gridiron football, track and soccer (real football). He served in many advisory roles including Senior Class Advisor for the first graduating class of Eastlake High School.

Jon also works as a ski instructor and instructor trainer.  He holds a Level III certification from the Professional Ski Instructors Association of America.   As such he is an instructor preparing staff to take their certification examinations.  In his free time, he enjoys free skiing, bicycling to stay fit, kayak and watching nieces play for UC Davis.