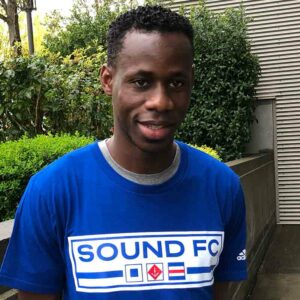 Kante Hamidou grew up playing competitive soccer in the Northwest, helping Tyee High School (SeaTac, WA) earn a District 3/4 Championship and take 2nd place in the WIAA 2A State Championship in 2013. As a premier soccer player at PacNW, Kante’s U16 and U18 teams each won Washington Youth Soccer State Cup titles.

At North Idaho College, Kante’s team won the NWAC NW Conference Championship, with Kante being recognized as the top scorer in the competition. Kante spent some time on the Seattle Sounders U23 reserves and as a Sounders S2 practice player before joining the Kitsap Pumas (Bremerton, WA) where he helped his team take the top spot in the NPSL Northwest Conference in 2017.

Kante began his coaching career in 2016, working with U8 and U10 premier soccer players as well as coaching youth futsal.