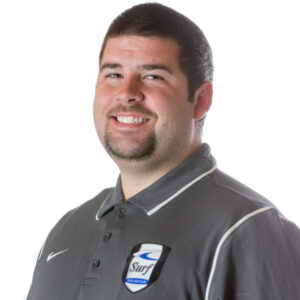 Ryan Campbell is pleased to be coming back to coach for Greater Seattle Surf. Ryan starting playing soccer at the age of 4 and hasn’t stopped since. He started playing in the Kent youth soccer association then moved on to Auburn Rainier Valley FC.

After his club career ended, Ryan went on to attend Eastern Washington University where he earned his degree in health and fitness in education. While attending Eastern Washington University he joined the Men’s club team and won the Northwest Collegiate Club Soccer Conference and earned a berth to the National Collegiate Club Tournament in his junior year. While still at Eastern Washington, Ryan was asked by a coach at a local club to be an assistant coach and trainer for his team. This is where he really fell in love with coaching and decided to pursue it further after college.

Ryan returned to Auburn and started coaching at a small club and then moved to Rainier Valley Slammers FC and then NW Nationals​. During this time Ryan obtained his USSF National “B” coaching license and NSCAA Advanced Regional diploma. He plans on getting his “A” license in the next couple of years.

When he is not coaching, Ryan likes to spend time with his wife, twin babies, and friends and family. He is also a teacher in the Northshore School District. His hobbies include: golf, camping, fishing, hunting, and other outdoors activities. He also loves to play and watch soccer and he supports the Sounders and Manchester United.