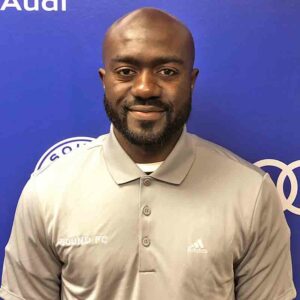 Originally from Mali, Seyti Sidibay actually grew up in Saudi Arabia and later Delaware. He began playing soccer at age 3, playing thru high school and college before joining the Norwegian semi-pro team, Finnsnes Idrettslag in 2009. Since Seyti’s coaching career began in 2013, he coached boys and girls teams from U9 all the way up through high school and college-ages at clubs and schools all around the Seattle area including PacNW, Tyee High School, Edmonds Community College, and Maple Valley Soccer Club where he also served as Junior Academy Director.

Seyti holds a USSF National “C” license and firmly believes that “to revolutionize the game, is to play a brand of soccer that is enjoyable and exciting for both players and supporters.”