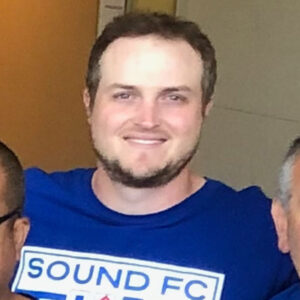 Simon Craig fell in love with the game from a young age. When he turned 9, Simon needed a new challenge and better competition, so he decided to find a club that teaches the game at a higher level. Premier soccer was the next step and Northwest Nationals has been a part of his family from the beginning. Simon accepted a spot on a U11 team at Northwest Nationals and he has been completely immersed in the game since. Simon played at NWN for seven years. In high school, he was the captain of the boys Varsity soccer team at Meadowdale High School and won a State Championship in 2004.  After high school Simon took a scholarship to play Division 2 college soccer for St. Martins University.

Simon was an assistant coach with the Nationals G97 team and helped them win one of their State Championships. That team was ranked in the top ten in the nation during the time he was an assistant coach. He also worked with the 2002 and 2000 Girl’s Red teams as well as head coach for the 2002 Girl’s Blue team and the 2003 Girl’s Silver team. The 2002 Blue team were League Champions. Six of the players on that team played up a year in age group and all have made this year’s GU10 Red Team. Simon has his USSF National “D” license and he plans on taking his USSF National “C” later this year.  In his 7 years at Nationals, Simon developed as a coach under the tutelage of Eugene Poublon, Vadim Tolstolutsky, Jim Thomas, Mel Craig, Scott Newman, An Nuon, and Paul Bayly.

Simon loves to spend free time with his friends and family. He likes to go camping and spend as much time as possible with his girlfriend. She likes to persuade him to come out and sing with her on occasion which they have a lot of fun doing together. He still loves to play soccer when he is able  or when he is fully healthy. Simon supports the Sounders, Mariners, and Seahawks, especially when the ’Hawks are playing hard behind quarterback Russell Wilson. He also enjoys watching the English Premier League, Serie A, La Liga, and the Bundesliga.