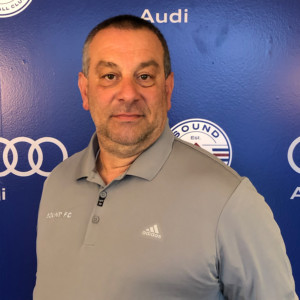 Teddy received the Seattle Sounders FC Golden Scarves Award 2010 for his dedication to youth and adult soccer in Washington State and beyond.

In 2008 Teddy was inducted into the Soccer Hall of Fame by WSSA and was inducted into USASA USSF Hall of fame 2012. Washington Youth Soccer presented Teddy with the WYS President’s award 2009, again for his complete commitment and passion to youth soccer. He has coached youth soccer for over 30 years, winning State Championships with  Northwest Nationals, Crossfire, & Seattle United.

Mitalas has been pivotal to the success of the Seattle Sounders Women since Seattle’s kickoff in 2001. They have been to the final four 4 out of the 5 years he coached. Teddy also coached the Seattle Sounders Men’s Reserve Team  and in 2001 made it to the Quarter Finals of US Open Cup and lost to LA Galaxy 2 -1. Along the way, they defeated Dallas Burn 3 – 2 in overtime in the second round.

As a soccer player, Mitalas has over 45 years of playing experience including Professional and Amateur Cups. He was a member of the Seattle Pacific University men’s team in 1980 and 1981. In 1981-1982 he joined the Men’s Seattle Sounders and in 1984-1985 Mitalas traveled to Athens, Greece to play in the Greek First Division with AEK. Mitalas was also a member of the U.S. Olympic team which boycotted the 1980 Summer Games.

As a coach, Mitalas has a USSF ‘C’ license and has coached at all levels of the game. Shorecrest High School was fortunate to have him as a head coach for the boys and girls programs for 18 successful years. He has been coaching Holy Names Girls Academy and Kennedy High School Boys for the last 7 years.. Teddy has been to the Washington State 4A, 3A, 2A Final Four 12 times and the State Championship 6 times.  He was also the head coach at Edmonds Community College for 5 years where he won 3 NWAACC Championships. He was the USASA Far West Regional Sports Festival Coach in 2001, 2002, and 2003 and coached the Gold Medal Champions in 2001 and the Silver Medal in 2002, 03.

Currently Teddy Mitalas lives in Brier with his wife,  Cindy.  They have three children Alexandra, and Christopher, and Brandon.