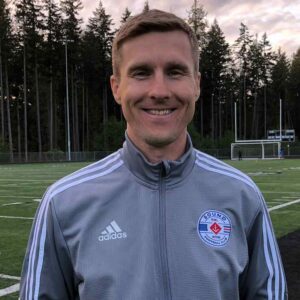 Walt grew up in a competitive soccer household where he developed resilience and team player skills. He played four years at Earlham College in Indiana, and was inducted in the Athletics Hall of Fame as a member of the most successful soccer team in Earlham’s history. After arriving in Seattle in 2005, he played four years of semi-pro soccer for FK Pacific and the Seattle Wolves in the Pacific Coast Soccer League.

Walt’s coaching career began in 1999, coaching residential soccer camps throughout the summer at universities on the east coast. In 2000, he became the assistant coach at his Alma Mater Earlham College. He was an award winning girls high school coach at Forest Ridge for 9 years and was a mentor to young coaches as a Site Director of Seattle Sounders summer camps for 7 years. Walt has 20 years of experience coaching premier soccer and has been at Sound FC since 2008. He is also the 9v9 Director at NYSA.

Walt strives to develop well rounded players by designing highly experiential sessions with the objective of engaging the players’ mind and body. He focuses on building strong relationships with players to assist them in reaching their next level. In his various roles as a player, coach, and mentor he has learned that successful teams and players possess the following qualities; discipline, effort, excellent communication, team work, and strive for excellence. He combines his knowledge of the game with experience to effectively create a positive environment that fosters these qualities and benefits players in all areas of their lives.

Walt currently holds USSF National “A” License and Youth License. His desire to strive for excellence in coaching through both studying and gaining experience is unwavering. His commitment to serve the community enables him to bring forth his gifts and to contribute in a meaningful way. He is eager to share his passion, experience and knowledge to develop the next generation of soccer players.

Walt enjoys spending time with his wife and 2 kids. Whether playing, coaching, or watching, he appreciates a quality soccer match when possible.